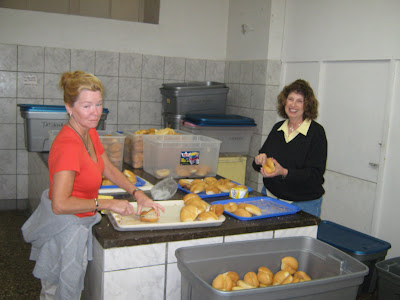 Lulu and Annie buttering the rolls for the morning snack

Westin, Lulu and I put ham in buns and buttered other buns this morning. We had 100 less to do because Lulu bought cupcakes for the kindergarten. Gloria was grateful we still have one more day to help her. Lulu delivered cupcakes to the toddlers, 3.4, and 5 year olds and helped Gloria deliver the rolls to all the boys.

Laura thought five was the maximum number of babies to climb on her but she was wrong. Today she had six cherubs . She gave three pairs of shoes to babies’ cubicle. The great helper there, Patricia, went bonkers over them as did one of the nuns who came over three times to see them. Unfortunately the shoes have round laces and are difficult to keep on the kids’ feet.

I stopped by el Hospitalito to make sure there were children to be entertained. Brenda, Marisol, and Isabel were there, but the latter was too sick to interact. We did puzzles, they drew pictures for me, we read books, told stories, and generally had a great time.

We took our usual bus to lunch. You have to get on quickly and sit down quickly as it begins moving as soon as the last person mounts the stairs. We had cream of artichoke soup or a vegetable omelet for appetizers at Qubba today. The main meal was spaghetti with beef or chicken tossed with soy sauce. I asked for fried rice instead and they accommodated me. Delicious. Weston and I had to hotfoot it back to PPA as I was told by Maria Flores that today was going to be a busy day and I had to be on time. We were a few minutes late, not bad.

Maria Flores was in the larger room with a big group of students. There were two big chairs for Weston and me. The children acted out El Castillo de Chuchurumbel while Maria Flores read the book I had given to her. It was an excellent production, the children were so well behaved, and I was truly moved that she would take the time to plan and practice this while she has so much else on her plate. After the performance I distributed the masks the students had made and hugged them good bye.

Two of the students stayed and Maria Flores started their angels with them. Weston and I glued. I mastered the gluing of the heads!!!!! I felt like Rocky on the steps. After that, we cut out feathers for the angel’s wings. Four more five year old boys came and we worked on their angels. We glued the hair and made the face with pens and the boys pasted the feathers of the wings. I used a glue gun to affix the wings on the bottles. After they left, Maria Flores asked us to stay longer and work with another group. Weston had to decline as he had to call his bank before it closed. Edith and I stayed. It took another forty minutes for the next class to come. We cut out feathers and glued on hair. These boys were also interested, cooperative and well behaved. It was a long but good day for me.

Lulu found a large card from the four year olds that she worked with in the kindergarten. Then she and Laura did physical therapy at PPA with Rosa Christina and Emily. They took half an hour to just play and hug and love the kids. They fed them and were upset at the way the substitute helper was treating some children as she was feeding them. It was the very first time anyone has seen unprofessional behavior on the part of the staff.

We went to Donoatello’s for dinner where there was a difference of opinion on the rankings of garlic bread. Lulu thought Donatello’s was the best while Annie considered Qubba’s the best. We had a lovely dinner and sang the song for Edith that goes to the tune of “Daisy, Daisy.”

Edith, Edith, you are our leader true.
We’ve been lucky to be on a team with you.
It was the trip of a lifetime.
You have been our lifeline.
The chores and tasks,
And all you ask
For the children of PPA.

When we got back to the hotel, we started the techno party. Annie downloaded everyone’s pictures to her computer, then made CD’s that Edith uploaded. There were a few glitches: Annie erased all of Lulu’s pictures from her camera, but luckily they had already been uploaded so she could give them on CD to Lulu. Also, Weston’s Apple computer wouldn’t load Annie’s PC formatted disk. He had to download everyone’s pictures from their cameras.

Thought for the day: “The only gift is a portion of thyself.”
-Ralph Waldo Emerson
Posted by A Penchant for Peru at 4:34 PM