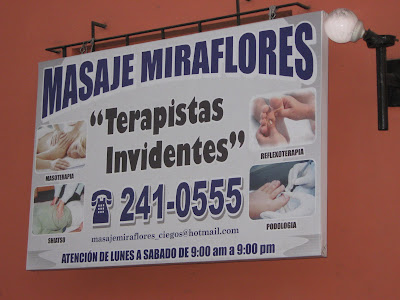 All the massage therapists were blind. That's what the sign says

Tuesday, November 18, 2008
I finally passed gluing!
Laura was still too sick to work this morning. Lulu and Weston went early to butter the rolls (for about 350 children.) I arrived a bit later and helped them. I went back to the office to pick up puzzles, construction paper, colored pencils, markers, watercolor paints, coloring books, storybooks, and Candyland before heading over to el hospilito. There were three girls today: Mirasol and Isabel from yesterday and Brenda with the broken arm was back. We enjoyed doing the new Spiderman and Hot Wheels puzzles as well as drawing, painting, playing Candyland, me telling and reading stories, and taking pictures. Laura decided she could work so she came over to tell me so we would make sure to wait for her before going to lunch. Brenda tried to squirrel away the construction paper but I asked for it back because I need to use it the rest of the week. It wasn’t until I unpacked my backpack in the Global Volunteers office that I realized that Brenda had pinched my sunglasses. Luckily they were not expensive, but were from Big Lots, though it was disappointing to have it happen. I need to remember that they have very little personal property.
Lunch at Qubba was a salad and beef and spinach ravioli with flan for dessert, along with the ever present garlic bread on which we all thrive.
Weston came with me to Kinder crafts (occupational therapy) in the afternoon. He set right to work gluing the angel’s heads. I decided to try gluing the pink tissue paper over the heads to make the faces. I succeeded well enough that Maria Flores did not ask me to do something else. When the three year-olds came, they cut triangles from green tag board that had already been traced. They glued three together (large, medium, and small) to make Christmas trees. We then dotted the trees and they pasted on plastic circles for lights which they had punched out the week before. It was a bit tedious for them. I was helping Marisol, who kept trying to eat the sticky glue. I asked her to go back to her chair. On the way back she fell and got a bruise on her neck. I felt terrible! This class was MUCH better behaved than yesterday’s class.
We all went to get a massage at the place that employs only blind therapists. We insisted that Edith get one too. Lulu was so relaxed that when the therapist tried to tell her in Spanish to sit up she said, “No habla Ingles.” Weston joked that the message was so special he couldn’t talk to his mother tonight. Mine was even better than the first one, and for only $10.00 USD. Lulu and Laura wanted to take a taxi rather than walk back to the hotel. The five of us smashed in a taxi would make a great photo.
We had dinner at the hotel and continued to talk and laugh. This certainly is a special group of people!
Posted by A Penchant for Peru at 4:45 PM